Teenage Mutant Ninja Turtles: The Last Ronin presents a bleak future for the Splinter Clan, as its sole survivor must trudge through a dystopian future alone, haunted by the deaths of his brothers. Michelangelo was once the funny one of the group, too, but not now. Goofiness tends to subside when your only companions are the souls of your dead brothers. So utterly consumed by revenge, Mike later attempts to commit ritualistic suicide after failing to avenge Rafael, Leonardo and Donatello. But how did he get here? What went so astronomically wrong? Readers finally received a partial answer in IDW Publishing’s Teenage Mutant Ninja Turtles #113 by writer and artist Sophie Campbell.

While the deaths of Mike’s brothers are still shrouded in mystery, it’s clear that this future could have been prevented if a certain someone hadn’t decided to go back in time to stop the events in her world from unfolding the way they did. It’s all because of Lita Ford. The Splinter Clan first formed a relationship with this homeless mutant turtle in Mutant Town and showed her kindness, and now she’s paid them back by damning them all.

What makes matters worse, her future isn’t that bad – at least, when compared to The oppressive Last Ronin. In Lita’s world, the Splinter Clan may have disbanded, but the brothers are all alive, well, it is assumed they are. Raphael sells his ninja skills as a mercenary for hire, Donatello becomes a war-cyborg, Mike exposes the secrets of the clan as a journalist, and Leo just up and disappears. Regardless, it’s obvious that Lita’s little escapade did something, as her future is nothing like Mike’s in The Last Ronin, though, she obviously didn’t expect that her meddling would have had such drastically negative effects. She just didn’t want to be alone anymore.

This isn’t the first time that the TMNT have dabbled in time-travel. More importantly, many of their forays into the past and future have irreparably changed the course of events in their own time – some of which still have yet to manifest.  The most notable trip that spawned the most consequences in IDW’s continuity transpired in TMNT 2014 Annual, during which the turtles were transported into the future to stop a gladiatorial competition where the best fighters were gathered and forced to fight each other. The ramifications that came as a result of this excursion were extensive as the after-effects later flung the turtles into various moments in time in a series aptly referred to as Turtles in Time.

So, it might be irrefutable that whatever the Splinter Clan does in the present day to prevent Lita’s future from taking place works because The Last Ronin‘s world looks nothing like the world Lita comes from, but it’s likely that the turtles can later prevent the events portrayed in The Last Ronin from transpiring. Just based on previous TMNT stories, the turtles could later get sucked into yet another time debacle, rendering The Last Ronin moot, or, better yet, The Last Ronin‘s Mike could somehow get tangled up in a time-altering event in his future. The possibilities are endless. 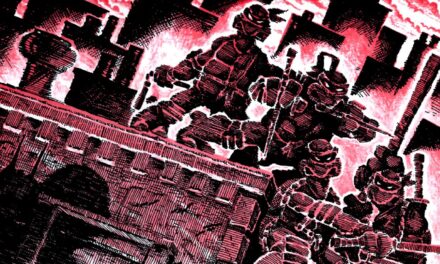